If you’ve been involved in a road traffic accident in the last three years and you weren’t at fault, Advantage Solicitors can help you with your compensation claim. 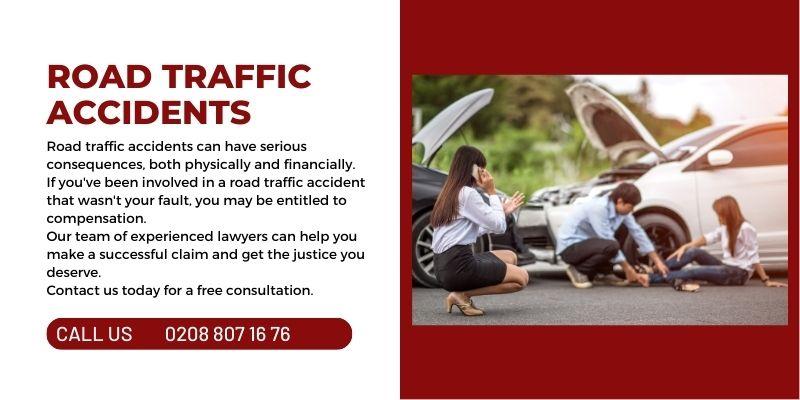 No matter the type of accident or injury you’ve suffered, we have the expertise to handle your case. We’ve helped countless victims of road traffic accidents claim compensation for everything from whiplash to severe injuries, and we’ve assisted with claims involving passenger injuries, motorcycle accidents, fatal accidents, and financial losses like lost wages and car rental fees.

We’re the go-to choice for hundreds of road traffic accident victims every month, and we’d be happy to help you too. Just get in touch with us or fill out a claim form, and one of our solicitors or caseworkers will be in touch within 30 minutes or at their earliest opportunity.

Don’t hesitate – let us help you get the compensation you deserve.

What is the road traffic accident claim in UK ?

Road traffic accidents (RTAs) are a common occurrence in the UK, with thousands of people being injured or killed in collisions each year. If you have been involved in an RTA and have suffered an injury as a result, you may be entitled to make a claim for compensation. This is known as a road traffic accident claim.

If you have been involved in a road traffic accident in the UK and are considering making a claim for compensation, it is important to act quickly as there are strict time limits in place for bringing a claim. Seeking legal advice as soon as possible will ensure that you are able to pursue your claim in a timely and effective manner.

How long does a road traffic accident claim take?

The length of time it takes to resolve a road traffic accident (RTA) claim can vary greatly depending on a number of factors. Some claims may be resolved relatively quickly, while others may take months or even years to be fully resolved.

One of the main factors that can affect the duration of an RTA claim is the complexity of the case. Claims that involve multiple parties or complex legal issues may take longer to resolve than simpler claims.

The severity of the injuries sustained in the RTA can also impact the length of time it takes to resolve a claim. More serious injuries may require longer periods of medical treatment and rehabilitation, which can delay the resolution of the claim.

Finally, the availability of evidence can also impact the length of an RTA claim. If it is difficult to obtain witness statements or other evidence, it may take longer to build a strong case.

Overall, the length of time it takes to resolve an RTA claim can vary significantly, but it is important to seek legal advice as soon as possible after the accident to ensure that your claim is pursued in a timely and effective manner.

What is the average payout for a road traffic accident claim UK?

The average payout for a road traffic accident claim in the UK can vary greatly depending on the severity of the injury.

For the most serious personal injuries, the average payout can range from £27,740 to £33,700. These types of injuries often result in long-term or permanent damage and can significantly impact an individual's quality of life.

For less serious injuries, the average payout can range from £14,690 to £27,740. These types of injuries may still cause significant discomfort and inconvenience, but they typically do not result in long-term or permanent damage.

Moderate injuries have an average payout range of £7,580 to £14,690. These injuries may require some medical treatment, but they generally do not have a significant impact on an individual's quality of life.

Minor injuries have the lowest average payout range, with amounts typically ranging from £2,620 to £7,580. These injuries are typically minor and do not require extensive medical treatment.

It's important to keep in mind that these are just rough estimates and that the actual amount of a road traffic accident claim payout can vary significantly based on a number of factors, including the specifics of the injury, the extent of any damages or losses, and any applicable insurance policies.